It’s May 2013 ,1.00am on a cold chilly Nairobi morning at club Tree House, Westlands-Nairobi. Three young men; Kenneth Muya, Wachira Gatama, Mordecai Mwini and one lady Msoo finish a show, tired and sweaty from all the dancing they had to do to cover for the ill equipment at the show, they literally had to share a guitar and the microphone among them, they are then paid Ksh 1000 and off they go, being late at night they are forced to take a cab for KShs. 600 to town, they give Msoo Ksh200 for fare, they all have fries and share the little left on fare to Dandora and Kayole. 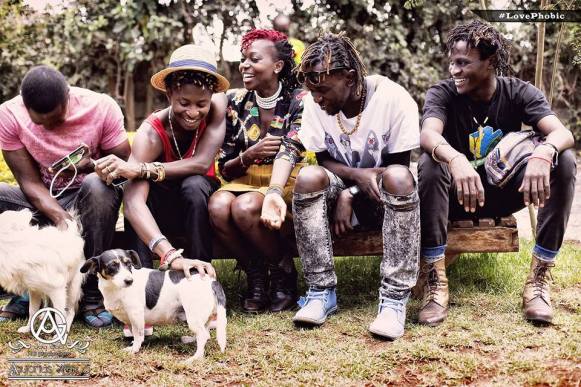 So was the life of Kenya’s Afro-Poetry trio H_art the band two years ago before the glamour and glitz as they struggled to make ends meet and the music count, but little did they know of what awaited them that very same day. Mordecai the bands lead singer did not catch a wink that night as he rehearsed for his audition at Penya Africa one of the leading if not the leading artist development schools and music labels in Kenya. It was a big deal for him, so much he had to convince Kenneth to accompany him and play for him the guitar at the auditions despite the exhaustion from the show. They had to walk all the way from Kayole to Pangani for the auditions.

Penya Africa based on Riara Road  founded by Nynke Nauta and Robert Wawesh has been home to many of Kenya’s top talent like Dempsey, KIU, Elani and Sauti Sol

The label’s artist development school ;Sauti Academy only accepts individuals but Natalie Lukkenaer the academy’s founder and Penya Africa’s Director fell in love with the duo and admitted them to school. On their first day of class they tagged along Wachira who is a poet, remember the guy that talks rhythmically in their songs with punch lines that live you in awe, that’s him.

..huyu huwa tunaimba nayeye..they responded when asked who Wachira was…That got me laughing my lungs out wish you were there as Mordecai narrated this to me..

They are as humble and funny as they look. He was confronted and asked if he sings, “no I don’t but I do poetry”he responded, he was challenged to do a sample and oh! my was everyone swept off their feet, but it was until a show at Rain Forest Lounge on 22 Feb 2013 that they got to seriously perform together and Natalie was blown away and admitted them as a trio. By this time they hadn’t dubbed  any tag or name just three friends who met an at Kenya National Theater for a cancer awareness play auditions in late 2012.They noticed they had same interests in fashion style, drawing, spoken word, acting, poetry and goals in their subsequent jam sessions and street poetry sessions at Agakhan Walk; which still attracts hundreds to date, they hugely credit it for helping them overcome stage fright.

Fatuma’s voice a social change platform through music, poetry and forums was one of their first break through shows, their music gradually penetrated people and started getting a lot of positive feedback .With just a term into the three term, year long program at Sauti Academy they approached the management and requested to record ,they were however turned down but through constant persistence and studio time they ended up making their first hit single Uliza Kiatu .What I loved most was the inspiration behind the song.

…Wachira and Kenchez were used to making fun of Mordecai’s old torn shoes, they  kept saying that if one needed to know of his or their struggles all they needed to do is look at his shoes and if the shoes could talk then it would narrate their struggles..

This went on to be the inspiration behind the song that tells a story of the life we go through to impress, look and live good. They believe Kenya is a walking nation as they narrate of how thousands of Kenyans walk every day from home to work and vice versa something they were common to. To them Uliza Kiatu is symbolic, to some it’s a story of a young man’s struggle to impress today’s demanding woman and to others it highlights the struggle to keep up with the rising economy and the demands it comes with. The song was released randomly at Kiss Fm’s The Big Breakfast show by radio queen Caroline Mutoko, life has never been the same for them since,in fact Caroline took them shopping and got them brand new clarks, the song went on to have massive air play on mainstream radio and TV shows .

I listened to it as I wrote this article on you tube and it impressively commands over 500000 views.

They haven’t bagged any big awards and nominations yet but they have received media love in blowing proportions ,they have graced almost if not all major and prime TV stations notably ;Mjue Msanii Wako(Citizen),One on One(Citizen) Hapa Kule News(KTN),Straight Up( KTN),Morning Express(KTN)The Trend (NTV) AM Live (NTV) and on radio Kiss FM,Nation FM, Homeboyz Radio, Capital FM and many more, They have been featured in popular magazines ,newspapers and entertainment sites like Pulse, The Standard ,Daily Nation, The Star,X news,People,Zuqka, Ghafla among many others. H_art  love transcends even past our own borders,they are so hard to resist, last year they were surprised to see people in Tanzania singing along to their lyrics in former Tusker Project Fame star; Hisia’s event; Mziki Wa Hisia, that’s how much they are loved out there, they received the same reception again when they performed at Jambo Festival in Arusha.

As we talked preparations were underway at the office for their travel to Uganda the next day for the Doa Doa  festival.

Their second song Nikikutazama, just 5months old with over 300000 views on you tube was done in appreciation of the African woman and beauty the caption at the end of the song says it all. What’s unbelievable is that the verses were written independently before the beat was ever made, even before they ever met, they say the single brought them together as H_art the band, they say the song blended them seamlessly and I can’t agree more, ever wondered what’s the inspiration behind their catchy name well H stands for heart the underscore (_) is a bridge and art stands for the different arts forms they are blessed with;spoken word,acting,drawing,playing instruments and singing,so a blend of the two gives you art from the heart  bridged with a thin line to make it original.

They recently released their third single and video on the Trend Live with Larry Madowo, the song is equally doing well with over 6000 views in just two weeks, It’s something different from the first two songs in fact they call it their Nishike, that one song that brings with it love n critics in equal measure, but they maintain that the song was dedicated to their loyal fans. The song speaks of the fear of love, they say that a times you love someone but you’re never sure if they love you in equal measure, so you end up spending more your time worrying about what they are doing and where they are  in your absence.I asked the overall inspiration behind their song content, to them it’s all about social change, their music is for ordinary Kenyans and depicting real life experiences.

2015 has been a good year for H_art the Band, lady luck  keeps smiling at them, an album is in the cooking and they expect to release it before the year ends, sorry guys that’s all i could get on the album, but I’ll mention some people u might see in it,if you keen enough to read between the lines.They are heavily inspired musically by reggae or doba as they call it Chronix, Richie Spice are among the top artists they look up to for inspiration. Locally they have nothing but appreciation for the recent comeback of live music and bands and they give credit to bands like Sarabi, Octave, Elani and Sauti Sol for keeping their consistency. They are open to collaborations and they already featured in Sarabis’s song;Nitabaki Na Nini along with other acts like Juliani,Tear Drops,Gachago and Berry.

…we wouldn’t mind working on a song with SautiSol,Tear Drops, Amos & Josh,Mwachari and Waksy,some of these might come sooner than you expect…

They credit their success to the awesome team they work with Esther and Natalie Lukkenaer from their management, makeup artist Tony Airo and Kevin Bosco video director who have been behind hit videos. Talking of makeup, have u noticed how unique their style is, would believe the first time they met they each thought the others style was funny and out of this world, they however maintain that their style expresses who they are as artists, they call it H_art wear. H_art the band are a busy lot, I started booking this interview 4 weeks ago and in that short time that I have concentrated more on them they have performed at 4 consecutive gigs.

They advice parents  not to take away the opportunity from their children to explore their talents especially art based careers that have been downplayed for generations like music,modeling,photography,writing and many more, they say such now pay the bills…. “huenda akawa Dr,Dre wakesho”….

They are however happy with direction Kenyan music is taking, more so that Kenyan audience is growing to appreciate live music and pay through the nose to watch them at gigs, they say it’s a big leap from the past. So for those of you who want to pursue music, three young men dared to dream and now they live it every single day. They did it all the way from the infamous Dandora and Kayole, walking kilometers to auditions until God answered one, what excuse would one possibly have, grab that guitar, or piano or drums or that pen, trumpet or violin and chase your music dream. A Dream is only as valid as your first move. As for H_art the band the journey CONTINUES……….