Returning to the role that just made her the first black woman to win a Primetime Emmy Award for Outstanding Lead Actress in a Drama Series, Viola Davis brings back the fire-and-ice intensity of criminal attorney Annalise Keating to Season 2 of How to Get Away with Murder. With the numerous, bloody loose ends left from the last season, this season premiere refuses to come in quietly. In doing so, however, it may have forgotten to step on the brakes.

The season premiere begins two weeks after the season 1 finale, in which it was revealed to the viewer that university student Lila Stangard (Megan West), found dead in a water tank at the beginning of season 1, was murdered by Frank (Charlie Weber), Annalise’s assistant. Frank committed the murder at the behest of Annalise’s husband, Sam (Tom Verica), to whom Frank apparently owed a favor. Within the world of the series, however, no one is aware that Frank is the killer. Additionally, the final scene of season 1 found Frank and Annalise discovering Rebecca’s (Katie Findlay) body in the basement of the Keating House.

With season two’s opening, the Keating Five are still unaware of Rebecca’s whereabouts, and Wes (Alfred Enoch) is still desperately searching for her. Meanwhile, Frank and Annalise suspect Wes killed Rebecca, and therefore set up a ploy to make him reveal himself. The other members of the five also deal with their own dramas: Michaela (Aja Naomi King) is still trying to determine the meaning of “Eggs 911,” the last message Rebecca sent to Michaela’s phone before she disappeared, and attempts to contact the person on the other end. Wes is openly hostile to Annalise in the middle of her class. All the while, Connor (Jack Falahee) continues to show Oliver (Conrad Ricamora) his dedication to their relationship by moving in with him, even after Oliver revealed last season that he’s HIV-positive. To see Connor show such dedication to Oliver, especially after we watched him seduce and cavort his way through life last season, is a charming turn.

As usual, the most interesting developments surround Annalise, particularly when her past comes back to haunt her in the form of an old colleague and fellow attorney, Eve (Famke Janssen). Annalise calls her to defend Nate (Billy Brown), who is in custody after Annalise was forced to frame him for Sam’s murder to protect Wes. The duo’s reunion is initially antagonistic, as the old friends confront their admittedly strained history. This tension hits its peak when Eve learns Annalise framed Nate, causing Eve to chastise Annalise for “ruining” people. This ultimately culminates in a scene in Eve’s apartment where Annalise has a rare moment of interiority, coming to terms with her history of hurting those close to her, including Eve. We even learn that once upon a time, Annalise was actually (gasp) fun. The full extent of Eve and Annalise’s history is revealed, however, when the two passionately kiss, showing the tension between them was never solely platonic. 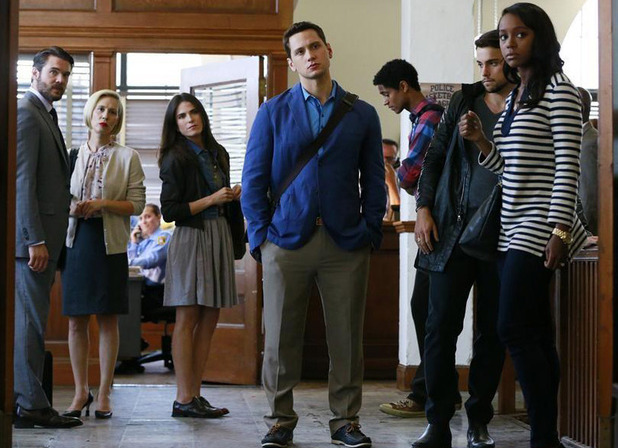 Annalise’s tender side has always been fascinating to watch (when it occasionally rears its head), and seeing this facet of Annalise’s sexuality is a firm reminder that there’s a complicated, multifaceted human being behind the cold, calculating lawyer. Annalise shows even more of her “fun” side when she decides to take the Keating Five out for a night of clubbing; to see the perpetually solemn Annalise get her funk on was an undeniably gleeful sight. Annalise even convinces the still-moody Wes to come out and dance with her, a move that seems to create a strange intimacy between the two of them as well.

Where the episode seems to take off sprinting is the reveal of Rebecca’s killer: Bonnie (Liza Weil). Having tied up Rebecca in the basement, Bonnie suffocates her with a plastic bag, unconvinced that Rebecca didn’t kill Lila. In the last season, we didn’t learn until the season’s end that Frank, one of Annalise’s closest associates, was a murderer. Now, we’ve realized another associate is a killer within the first episode. Even for a show so focused on wanton murder, this reveal creates a difficult note to top: how do you instill tension and suspense in a narrative where characters kill on a dime? Although Bonnie has always been severe, to see her kill without a moment’s hesitation, with no motive besides suspicion of her victim’s guilt, was off-putting. With two of Annalise’s closest associates now outed as murderers, how does one to keep watching and sympathizing with these characters, knowing what they are capable of? Further, when you’ve crossed the line into murder so quickly and with so little buildup, how does murder retain its narrative heft?

The season 2 premiere does offer a reverse of the pilot’s structure, ending with a jarring fast-forward, from Wes and Annalise dancing in the club to two months in the future, with Annalise shot and bleeding in her home, and Wes running from the scene. Annalise’s lecture about the often-intimate ties between killer and victim plays over the scene, focusing on Wes when she says it could be “your lover.” Is this to imply some kind of future relationship between Wes and Annalise? Annalise’s attention towards Wes at the club is definitely some kind of indication. We’ve seen Annalise show her dedication to protecting Wes, but with this scene the extent of Annalise’s intentions towards Wes remain unclear.

Are Bahati and Diana getting married soon?

IS IT HARD DATING A CELEBRITY?