It was yet another thrilling weekend for Football lovers as the Frenzy English Premier League resumed (Yeah….and Valentines too!)…Saturday had some amazing footsy wootsy but the main event was the Amazing Super Sunday which had an array of thrilling, mind-blowing and blood-rushing football fixtures.

SportPesa accounts were all set as men took their significant halves to fancy restaurants and lounges to commemorate the Lover’s day…of course to the men’s financial detriment!!

As the lunch hours elapsed and dates ended abruptly due to some “unavoidable” circumstances that had come up little did the mamas know that the circumstances were the super fixtures which had coincided with the men’s worst day( Others call Valentines an extension of January)…So mamas went home and Sports Lounges and Pubs were filled to the brim by Football fanatics. Everyone clad in their favorite teams jerseys. At exactly 3:00 pm, Arsenal Vs Leicester was underway.

The Arsenal game I must say was thrilling if not one of the authentic Arsenal’s best display of Resilience and class mixed with the team’s sheer touch of Talent. Arsene Wenger had put up his best team forward to rival Claudio Ranieri’s Foxes (Who are just warming the top spot for the Big Teams…This is a fact)

Just before the half-time whistle, Arsenal’s Monreal made a tackle with the Premier League’s Top scorer, Jamie Vardy playing victim to the controversial tackle just a few yards into Arsenal’s penalty box. Arsenal were on the losing end as Jamie Vardy won them a penalty. As expected, Vardy pocketed the goal in. The after-burners of the unplanned for act caught Wenger’s men. But resilience seemed to have caught the better part of them. Alexis Sanchez constantly rattled Leicester’s defence line. It was not until the 54th minute when Sanchez undying efforts bore some fruit. Leicester’s Full Back, D.Simpson tackled the energetic Sanchez which won him part of the awaiting Leicester’s Valentines Gift… A Red Card.

The Red card favored Arsenal as Walcott netted in the first goal for Arsenal in the 70th minute…This is when this Game took a dramatic turn as Leicester’s attack was crippled and Arsenal obtained fresh energy and mad psyche. Attack after attack from Arsenal ensued with Casper Schmeichel, Leicester’s goalie saved Leicester from blood-thirsty Arsenal…at least for the moment.

The Bus tactic was played from Leicester as their defence line was filled with their players in an effort to protect their goal line and secure themselves atleast a point. This was not to be since Welbeck who came in the 83rd minute secured Arsenal a last minute win…The perfect Valentine’s gift for any Arsenal fan who understood the importance of that win. 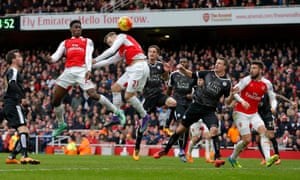 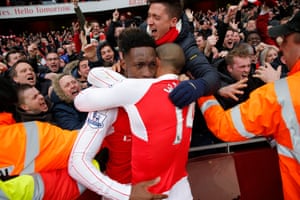 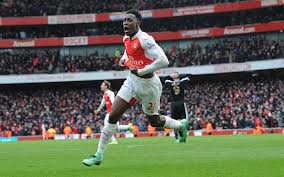 Welbeck’s last second header in the final seconds of the game won it for Arsenal as Mesut Ozil’s perfect delivery just got Welbeck at the right time…talk about perfect timing!!

Gunners’ SportPesa accounts rippled with money which was necessary to compensate the fortunes “squandered” over Valentine’s dates and escapades.

BABU OWINO’S 14 MILLION ‘GRAND’ PARTY, HOW IT ALL WENT DOWN (PICS)