Queen Riri called out Snapchapt for running an ad that made fun of her. Do you remember what Chris Brown did to Rihanna when they were a thing? That time they were Chrihanna, a power couple? Mmmmh… the good old days. Well maybe this will jolt your minds peeps. Yeah, that time when Chris Brown assaulted Rihanna after she claimed she was pregnant with his baby.

Snapchat evoked this memory through an ad and Rihanna had it rough for them. They fired a shot at the wrong person.

Snapchat is doing crisis management after Rihanna called them out for running an ad on their social media platform that poked fun of her domestic violence incident at the hands of Chris Brown. Breezy is just silent on the issue or he is probably having an emotional breakdown, all the lasses are probably hoping.

A rep from the National Network To End Domestic Violence said they were contacted by Snapchat on Thursday asking the social app if they could bring an NNEDV member onto its board. The member was to educate the Snapchat staff on domestic abuse and what would be appropriate to post so that they do not make a similar mistakes again. 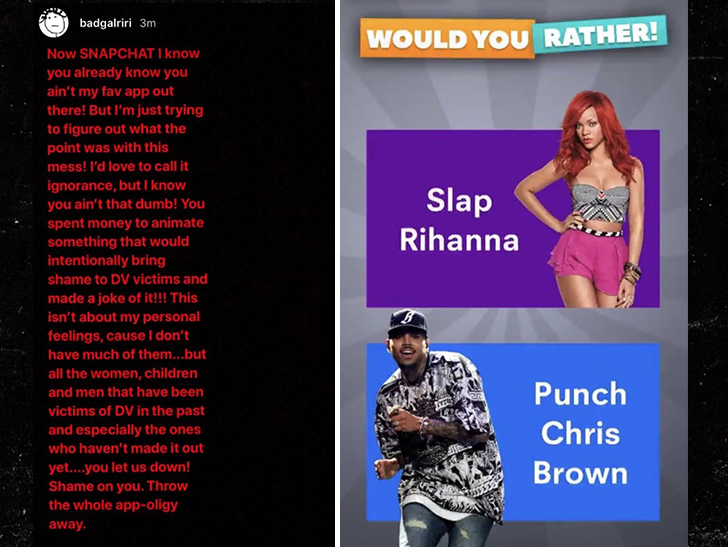 Rihanna blasted the ailing social media platform for running an ad for a game app “Would you Rather?” that disturbingly asked: Would you rather “Slap Rihanna” or “Punch Chris Brown?”

People were fast to call Snapchat tone deaf, and Snapchat rapidly made a mea culpa, calling the ad disgusting and admitting they made a terrible mistake.

After a successful visit and video shot in Uganda, French Montana gives back

A TREAT FOR THE REGGAE LOVERS!